"The special drama of Standedge tunnel lies in the fact that long stretches of very small bore lead into large natural caverns in the limestone, comparable in type with the famous limestone caverns of the peak district. Through these caverns passes the boat and enters the seemingly tiny passages ahead. Much of the man-made bore is unlined through the rock. Also there are at intervals large passages, or "adits", both tall and wide, sloping upwards from the canal tunnel into the railway tunnel at a higher level and to the side. Through the railway tunnel runs the main line of the former Lancashire and Yorkshire Railway. In those days it was still entirely steam operated; so that every time a train tore through the railway tunnel, which, as I say, was frequently, there were not merely the eerie thunder and scream in the canal tunnel, but also dense clouds of smoke and steam blowing completely black. Smoke blew out steadily from both ends of the canal tunnel, as from fumaroles. We stopped the boat at the foot of one of the adits, walked up the slope, and watched several trains roar by.
We all emerged so black that there was nothing for us to do but entrain third-class from Marsden to Huddersfield, implying that we had been mining for some unusual mineral; and at Huddersfield manoeuvre and insinuate baths out of the splendidly architectural George Hotel, by showing them press cuttings about ourselves and saying that we should all want large dinners too. Never in my whole life have I made a bath so black as that evening in the George; or on any other occasion needed three baths, one after the other. It was like early D.H. Lawrence."

Reproduced with permission of the publisher from 'The River Runs Uphill' by Robert Aickman (J.M. Pearson 1986), describing the 1948 voyage of Ailsa Craig, the last passage over the Huddersfield Narrow before closure, by Aickman, Rolt and senior IWA members.

The tunnel is open on Monday, Wednesday and Friday. Three boats a day can go in each direction, from Marsden in the morning and from Diggle in the afternoon. Click to see CRT's guidelines for boaters. Boats are accompanied by a member of CRT staff.

If you haven't got your own boat, or can't get it here, CRT run public triops. 30 minute trips go part way into the tunnel from Marsden, and long trips go all the way through. The experience is unforgettable and unequalled - try to do it somehow. Details of trips are on CRT's Standedge pages.

Trudging across Marsden Moor in the pouring rain and a gale, the sky lit by fires and the earth shaking with explosions, the men who ran pack horses must have been amazed by the construction of Standedge Tunnel.

Though not unique, it is by far the longest canal tunnel in Britain and it stands as a monument to the determination of those who built it.

As extended to allow passage of one of the railway tunnels, Standedge ended up as 5698 yards, its nearest rival being a tunnel of 3946 yards on the Thames & Medway Canal, long since converted to a railway. Dudley is 3172 yards and Blisworth, the longest tunnel in normal use, is only 3056 yards.

Standedge was built by men, horses and dynamite. To start with, a line was surveyed across the moor, then shafts were dug, perhaps at 200 yard intervals. The deepest shaft was about 600 feet. Using plumblines, the heading was established at the base of each shaft, as well as at the portals, and tunnelling started. Standedge is cut through rock. One man would hold on his shoulder a drill - a long metal bar with a sharp end. Another would hit the drill as the first man twisted it. Slowly a hole would be made. Into this was then inserted dynamite, the fuse lit, and everyone out of the way. A small amount of rock would be brought down to be cleared away up the shafts using horse gins, before the process started again. You can see today the marks of the drill in the tunnel wall. Unusually, most of Standedge had rock solid enough to be left unlined. There are pronounced doglegs where the headings were not well aligned, even though the fist bore would have been a pilot, later enlarged.

The tunnel took 17 years to build.

There are four passing places in the tunnel. Although steam towage was tried between 1824 and 1833, for most of its life the canal relied on leggers, there being no towpath because it would have cost so much more to build. There was a system of alternate working. In 1904, the year before the tunnel closed, boats entered at the Marsden end at 6 a.m, 2 p.m and 10 p.m; and at Diggle at 2 a.m., 10 a.m. and 6 p.m. 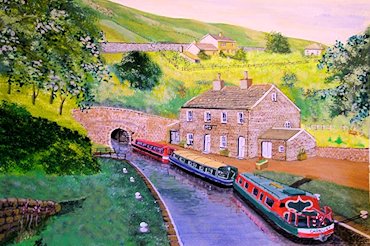 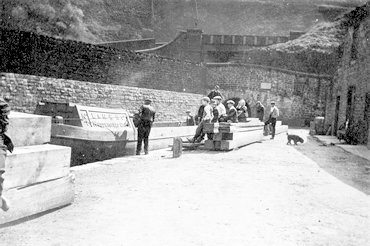 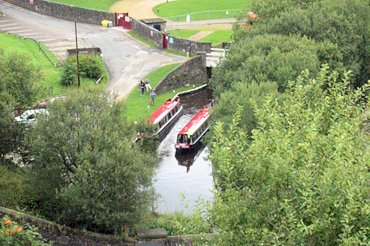 View from above Marsden portal 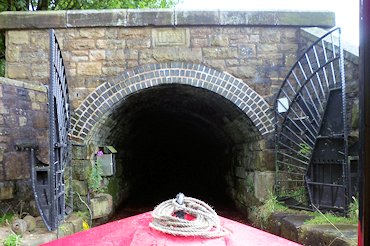 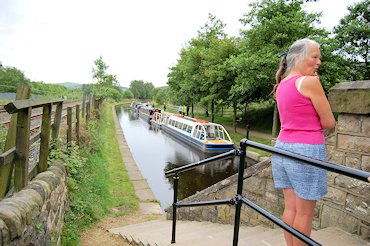